With our return to Park City, we chose two new trails. The first day we rode Mid Mtn from Empire to Park City and then added a climb up Jenny’s and a descent in the woods that was alongside the Mtn coaster. At first we thought the squeals were either injured bikers or others descending fast and wanting to pass – but it was just excited tourists.

Our second ride was a loop up Deer Valley via Team Three Bears and other trails to the top of Tidal Wave. Then down Tidal Wave and across mid Mtn back to the car. Beautiful ride and nice Vistas. There was even a ginormous mansion being built above where the chairlifts go.  Actually Park city and deer Valley have mostly large mcmansions–and they go up into the mountains and alongside ski runs.  The parking lot at the base of Park city ski area is right in town–the lot was pretty full, but the base lodge is like a small city in itself and the trails were uncrowded.  We got more suggestions of rides from the LBS, so we’ll have to return again next year.

Leaving Park City we drove through Heber City and the down the canyon alongside Deer Creek reservoir.  It is quite a scenic ride.  It was a gusty day and there were some kiters and windsurfers out on the water.  We spent the night in Provo before heading to Moab. 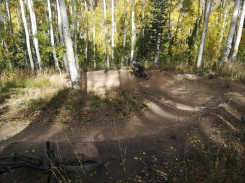 One thought on “Park City. Even better the second time around”