With more fires in our area and fires in California combined with the wind direction, the forecasters are warning of smoky skies..  Friday and Saturday, the skies were clear and the wind was good– I was on the 5  or 6 m, Butch on the 6 or 8 meter. The river is warm and the air feels like a hairdryer!   Friday night we listened to The County Line (great band with all original songs) joined by Ted Matzen on electric guitar. Evidently, later that night a fire started near Memaloose State Park.  It’s the second one there this year, so it was called Memaloose 2.  The fire was across the river and just downstream of Lyle, where we kited on Saturday.  When we got there, the smoke luckily was moving just south of the area where we kite.  They were using helicopters and single engine planes with pontoons to fight the fire.  The planes would fly up the river and turn right over the kites, skim the river and pick up water then dump it on the fire.  Pretty amazing.  Evidently, these new small planes are very effective.  Rowena was under evacuation, but the fire got under control by late evening.  Everything is tinder dry, just crazy.  Hot temps forecast for the next week—ugh. 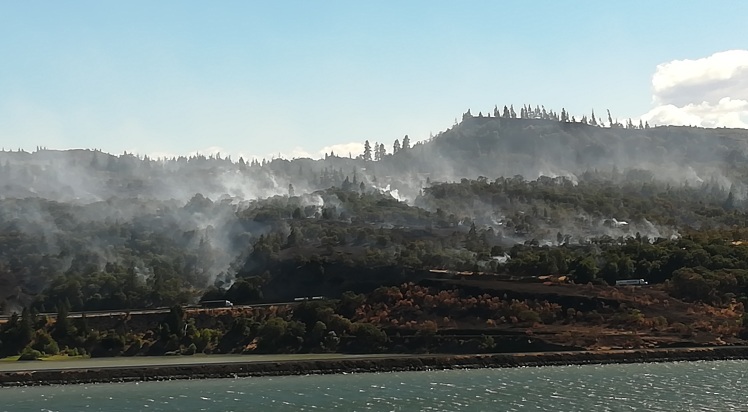