So we headed to Switchgrass Trails in Wilson KS. The sun was full on and the wind was brisk, we found a nice campsite and geared up and headed out on the trail. The trails were well marked, sandy, sometimes just a deep rut, and out in the open sun. The late summerr flowers were in bloom as well as the goat head thorns (ouch). Without the breeze, I think we would have melted–the thermometer in the shade read 90. So thankful for open air showers and the bug nets on the windows and door. No see ums were vicious but the sunset over the reservoir was colorful and the clear night sky showed off the stars and a very defined milky way. The trails weren’t awesome and we thought we would push on the next morning instead of riding there another day. That ended up being a great decision as we were awakened at daybreak to a visually beautiful lightning show. Riding at Switchgrass with any amount of rain would be awful–it’s a lot of red clay and slippery rocks. Within twenty minutes of leaving the park the rain poured down and realized that we made a great decision. Kansas is not an overly beautiful drive on I 70, but we were astonished at the number of windmills–Kansas gets 30% of its power from wind. We saw some antelope after crossing into eastern Colorado and got to Loveland (north of Denver) by 2. We got a ride in on Devil’s Backbone before camping. Tomorrow we head to Curt Gowdy. 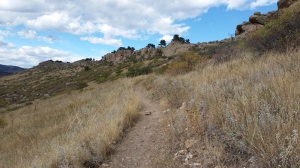 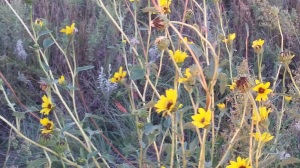 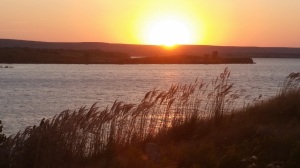 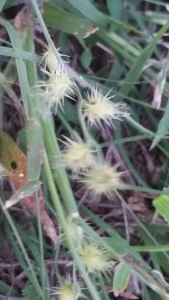